Shaking off the dust

Well it's been a while since I've posted. Looking around I see that Mormon leaders have not yet announced a press conference to concede that their truth claims really don't seem at all plausible and therefore members should consider their options for how to spend the remainder of their lives. So it seems I still need a place to vent about the strange world I inhabit and all the continual harm this church does to otherwise wonderful people and relationships.

Here's a recent sampling. On

Why do mormons not give their children the right to choose religions?

Why don't you give your children the right to stand at the edge of a cliff? Mormons believe theirs is the one true church, and the only path to making their family "eternal." Nothing matters more to them, nothing else matters at all really if they're true believers. And yet at the same time they really need for these children to feel they own that choice to remain Mormon.

That's why you always see parents announcing that their 8-year-old has "chosen" to be baptized. Those always crack me up, like the kid has just completed a rigorous study of all possible belief systems, narrowed it down to either Mormonism or Jainism, tried each for a while, and Mormonism (the Brighamite version) finally won out.

Delusional? Yes. But within that framework the masked coercion makes perfect sense.

The fear of outside information runs deep in Mormonism. Mormons will read non-Mormon fiction, watch non-Mormon entertainment or whatever, but if a subject touches in any way on matters of faith, then only Mormon sources will do. And since Mormonism's correlated explanation of Jesus' life and mission is so unambiguous and clear, so is their understanding of it. There's no nuance, no curiosity about, say, the various interpretations of the different New Testament authors. No recognition of the contribution of Paul to Jesus' legacy. It all just boils down to how to give your life to the Mormon church from the earliest age until death, and then how to ensure your funeral is used as a conversion tool for others.

This church is a cancer. I want to see it dealt with, and I want to help people who are trying to figure out how to live outside of it. A woman who posted occasionally on PostMormon.org ended her life recently, a closet nonbeliever in Boise who lost hope for any kind of happiness or acceptance. There are consequences to maintaining lies about the world we live in, even comforting ones.
Posted by ElGuapo at 12:40 AM 2 comments:

How to dismiss Mormon theology in a philosophical/intellectual way? —AR

What lies beneath every Mormon "testimony" is something called Moroni's promise: the idea that if you pray to know if Mormonism's truth claims are real, you will feel a positive reassurance in your heart that they are. Nevermind the fact that lots of people don't immediately feel any such thing, and kids raised Mormon actually work actively to gain this testimony (somehow without ever entertaining the possibility that the promise therefore failed).

So yeah, even ignoring the "heads I win, tails you lose" approach Mormons take to Moroni's promise, the real philosophical problem is the promise itself. WHO SAYS that a good feeling about the book means it's true? Well, the book itself says so. You'd think this would cause Mormons to doubt the source of these "divine" confirmations in their heads, but it never does. The whole basis of Mormons' faith is a simple confidence trick.
Posted by ElGuapo at 12:25 AM 1 comment:

The cost of discipleship

How do I tell my mom I want to be Mormon? —linda

Ive already prayed about the book of mormon and i know it to be true, i have a great testimony of the church. My mom is convinced the church is weird and somewhat of a cult. But I know the truth and I dont kow how to tell her I love going to church and I love the truth in it? How do I tell her I want to take the missionary lessons? And what if she says no?

I'm sorry, but you can't make things true just by wishing it were so. It's your life so do what you like, but joining the Mormon church is not worth whatever social benefits you might expect to come from it.

Your Mormon friends are not trying to lead you astray, but somehow they haven't got the message that the stuff you read in the Book of Mormon could not possibly be real ancient American history. It's a 180-year-old scam that only survives because people who've given their lives to it are afraid to check it out and admit they've been boondoggled.

Source(s):
"It is morally as bad not to care whether a thing is true or not, so long as it makes you feel good, as it is not to care how you got your money as long as you have got it." —Edmund Way Teale
Posted by ElGuapo at 9:27 PM No comments:

Can anybody tell me what they know about mormon history? —brew

im ex mormon only now digging into mormon history. particularly i am concerned with joseph smith i find him very interesting. you may find it interesting that only after losing interest in the church, do i find interest in its beginnings. let me tell you, there is great effort within the church to keep people ignorant of certain historical facts while emphasize certain others, and admonishing youth for exploring "the devils literature" ect .....

I agree that the church's history becomes more interesting once you take the blinders off. I don't think the typical church member or leader tries to keep people ignorant of its unfiltered history. They either believe 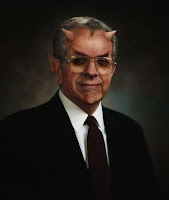 Boyd K. Packer's idea that not all things that are true are useful, or in many cases they probably just don't know what they don't know. But the church institution itself certainly has developed a pattern of suppressing, cherry picking, or just plain rewriting its history. You'd have to have a pretty narrow definition of lying to say that the church is honest about its beginnings.

And maybe that's part of what makes Mormon history so interesting—the fact that for so long the church succeeded in controlling the message and marginalizing critics in the eyes of the faithful. I think what happens over a generation or two of faith-promoting storytelling is that the stories become entrenched, some people become heroic and legendary, while others become cautionary tales.

Then you get someone like Fawn Brodie who comes along and writes (pretty sympathetically actually) about Joseph Smith but without deference to the powers that be, and it's no wonder there was an uproar over her biography. Another biography that I think is of equal caliber is "Mormon Enigma" by Newell and Avery. That one's actually about Emma Smith, but at least the first half of the book up until Joseph's death is very relevant to your search I think.

Please add a comment if there are specific areas of church history you're interested in, and I'm sure I or others can make some good recommendations.

Why are some people prepared to read the Book of Mormon and others not prepared? —John quill Quill

Why are some people prepared to learn about evolution? Prepared to fight for marriage equality even when it doesn't help them personally? The wording of your question betrays your ignorance. By the way I've read the book cover to cover. It's a joke.

Posted by ElGuapo at 9:09 PM No comments:

So the Book of Mormon can't be true because we believe Adam was a real person? —Tom

I fail to see the logic in saying that just because we believe the story of the Garden of Eden was a historical event, this automatically means Mormonism is false.

I wish you would say more about how you see the Garden of Eden story fitting in with what we know about the world today. It's a fable, Tom, written before people had discovered germs, or atoms, or of course DNA. And just to clarify, we haven't "evolved from" apes. We evolved from earlier versions of hominids, who would be classified as primates just like us.

Anyway, I take you to mean that belief in Adam and Eve must be rational because lots of people believe it.

Lots of people also believe in UFOs. That's not evidence of anything except the credulity of the average person.

And finally, the Garden of Eden story could be absolutely true and it would still be ridiculously obvious that the Book of Mormon is contrived. Do you know anything about ancient Native Americans that you didn't learn in Sunday school? What did they eat? What animals did they have? What technology? What about their language and writing? Just pick one subject, ANY SUBJECT!, and see if what you learn looks remotely like the history you read in the Book of Mormon. I'm sure it doesn't seem like it now, and you probably think I'm just being a jerk, but the day you finally realize that Joseph Smith made the whole thing up will be the best day of your life. You're welcome. :)

@Adam: Don't keep us in suspense. What's the evidence you see that makes you think the BoM is literal history? So the more you learn about ancient Americans' agriculture, technology, language, etc., the more it looks like 3 Nephi 3:22? Have you contacted National Geographic to let them know?
Posted by ElGuapo at 8:37 PM No comments: